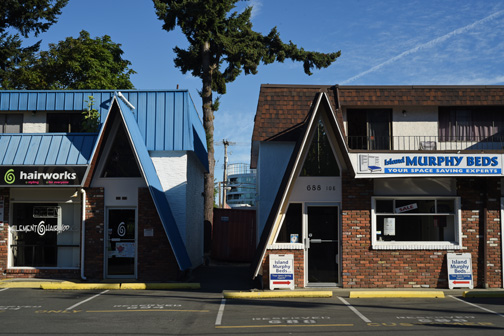 Architecture, of course, like everything works in cycles of fashion. The A-frame entrance to suburban housing, at least in British Columbia, was common enough in the 60’s and 70’s. It’s perhaps rarer to see this vernacular architecture at use in commercial buildings from that era, certainly with the use of the double A-frame on the structure, which you can’t see in this image(the A is at either end of the building), and to see two buildings built the same next to one another. Note the modernist (less than a decade old) condo building with it’s silver exterior in view between the two.