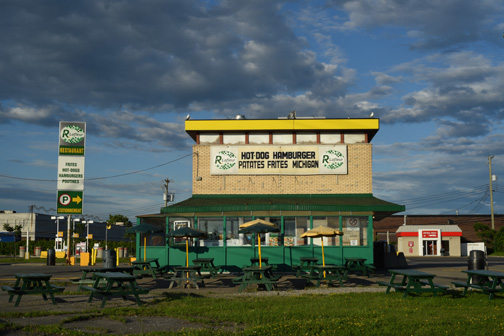 Travelling a bit further afield than usual. I was in Montreal in June for work and spent two nights at a hotel near the airport in the suburb (city?) of Dorval. The hotel was located in the middle of an industrial district which was deserted sit was the weekend. I’d gone for a walk in the evening looking for a someplace other than the hotel to eat but anyplace nearby was closed. This Quebec fast food chain outlet’s colours were bright in the late evening sun but since it was closed meant hiking back to the hotel for dinner.