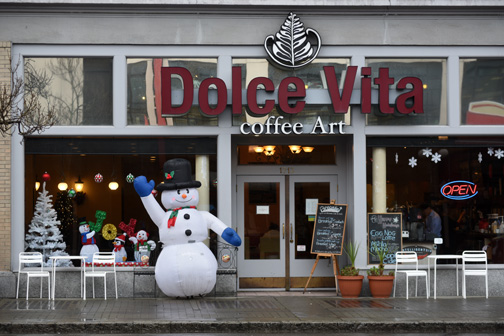 The photograph above has nothing to do with the post. It’s a street scene from downtown Victoria, where every year over the Christmas season, the owner puts up a inflatable snowman, often the closest we’ll come to snow in our west coast climate.

If you are a reader, discovering a new writer whose words you enjoy is obviously always a treat. I tend to read mainly non-fiction and the writers I enjoy, and whose books I keep, are those who I will go back to and reread every year or two. This process, will over the years, weeds out some books after a time. I’ve found with certain non-fiction books, those that deal with current events, can lose some of their appeal as the events fade, the writing not strong enough to carry them a decade later.

I find as well that you re-read differently.  That time and experience add to the experience, making it better, or sometimes relegating the book to the used book store pile.

I’ve just discovered Geoff Dyer, a prolific British writer. I’m currently ploughing through his non-fiction, he’s also written novels, after discovering his selected essays and reviews ‘Otherwise Known As The Human Condition’. For me when I discover a writer whose work I like but also find that he/she has some interests that dovetail with mine then I tend to grab everything they’ve written

The essays cover a couple of lesser known photographers who I’m interested in, William Gedney and Michael Ackerman, as well as writers such as the Polish journalist Ryszard Kapuscinski among other topics. That book led me to his book on photography, ‘The Ongoing Moment”, his latest ‘Another Great Day at Sea, two weeks on a US aircraft carrier and am currently ploughing through ‘Yoga For People Who Can’t Be Bothered To Do It’, a sort of travel book. He’s eclectic if nothing else although themes carry through. His interest in photography and lack of personal ability at it pop up though out his various pieces.

An odd observation from the aircraft carrier book. He is paired on the two week trip with British photographer Chris Steele-Perkins, a member of Magnum Photos, the famous photographer collective/agency. He refers to Steele-Perkins simply as The Snapper ( a British bit of newspaper reporter slang for a photographer), never mentioning him by name and only momentarily mentioning the photographer’s work on the boat. It seems an odd act of omission given his interest in photography.

When I finish the Yoga book I have his work on D.H. Lawrence ‘Out Of Sheer Rage’ and then will probably re-read some of the essays before leaving Dyer for a bit. His essays will be a keeper for the shelves.