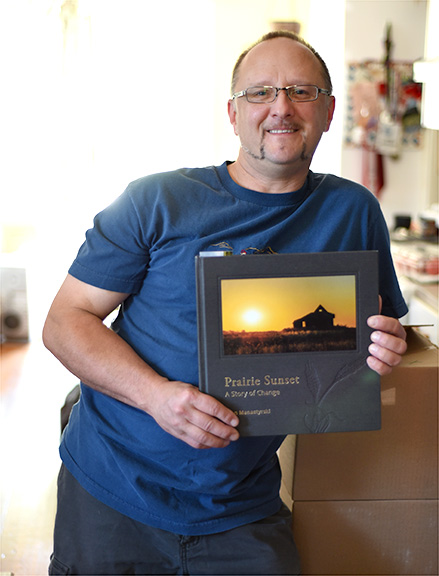 I met  photographer Dion Manastyrski a few years ago when I gave a talk to a local photo group. He contacted me after and asked if I minded meeting up to have a look at images from a project he was working on.  The photos he showed me were from the Canadian prairies, mainly Saskatchewan, and examined the disappearance of  rural and small town life in that region. He had a lot of questions about where to take the project and about his desire to create a book of the work. We talked about the images he had at that point and I gave him some advice on shooting and different ways he might approach a book project. We kept in touch after that, mainly by email, as he continued to work on his project. I meet a lot of photographers who want to create books or exhibitions of their work and often nothing happens. It’s a lot of work, coordination and too often, a very expensive proposition. Dion persevered though, continuing to shoot, learning to create videos, searching out archive images to complement his own photos. Collecting quotes from residents about their experiences in the prairie. Conducting an Indiegogo crowd funding campaign. The result of all that hard work, just out now, is a big beautiful self published book (printed by Friesens in tiny Altona, Manitoba), You can check out the project and book here at his site Prairie Sunset.