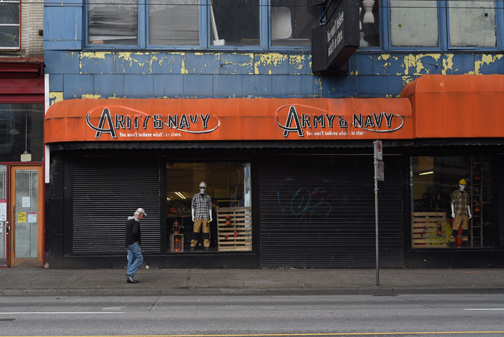 The exterior of Army & Navy store, a long time fixture along East Hasting Street in Vancouver, is looking pretty shabby these days. When I was a kid, and the area was still a commercial hub, my parents would bring us in to the city from our home in the Fraser Valley and the Army & Navy was always a stop for new school clothes, coats, shoes etc. Goods were low priced and well made for the most part. At the time the area was still a shopping district although the SRO hotels existed and there was a transient population in the neighbourhood. Booze was the drug of choice at the time , although I’m sure there was some drug use. I remember most of the locals were single men, living (I assume) on a small pension or government assistance. They were usually well dressed, if a little worn, but in jacket and tie. At least, that’s how I remember it as a kid. Now gentrification is slowly pushing it’s way into the area and will replace the low rent stores and shops with high end shops and stores. No middle ground. A woman living in the DTES told me it was actually a good place to live right now, the only thing missing was a hardware store and a KFC. Somehow I don’t think gentrification will bring either of those. Therein lies Vancouver’s housing problem. While some work is done on providing low (very low) income housing, and lets face it, the amount promised is never the amount delivered. The rest of the housing will be high end, it will not serve the working poor, it will not serve the minimum/lower end wage student or young person starting out and it will not even serve the middle income salary family. They will all be frozen out of the core where they work.