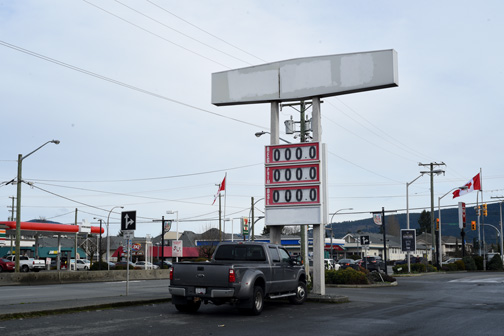 This photograph shows not only the disappearance of a gas station but the signals the disappearance on an entire grocery store chain (Safeway) on Vancouver Island. Due to a takeover by eastern grocery giant Sobeys of the local chain Thriftys that resulted in the  one company owning most of the major chains on the Island  the competition bureau (some government organization anyhow) ruled that in the best interests of consumers Sobeys would have to close their Safeway locations on Vancouver Island. The result was that Save On, owned by another large chain, took over most of the Safeway locations. The grocery store on the site (not seen here) continues on but the gas station is shut and appears to be staying that way.